Hello everyone! This is Shu. I thought since everyone else posts their ads here, I would as well, just in case this helps get our name out there. I've opened up a new forum Rp: Dav'Ris/ http://davris.proboards.com/ There's not much in there yet for apps, but I only just opened it the day before. I'm hoping to see a lot of familiar faces and lots of new ones :3

The concept of Dav'Ris is simple; if you've ever watched Lord of the Rings or the Hobbit, played Dungeons & Dragons or DragonAge, or have ever been exposed to a fantasy world where humans live alongside elves, dwarves, and occasional dragons, you've already got the gist of the world. It's a medieval fantasy RP that will have fun DnD-style quests, so come on! Whether you're a mage mastering the elements or a knight off to fight a dragon, there's a little soemthing for all fantasy lovers <3 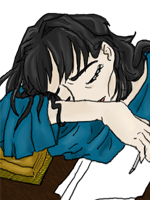