"There is good and there is evil. Right and wrong. Heroes and villains. And if we're blessed with wisdom, then there are glimpses between the cracks of each where light streams through. We wait in silence for these times when sense can be made, when meaningless existence comes into focus, and our purpose presents itself." 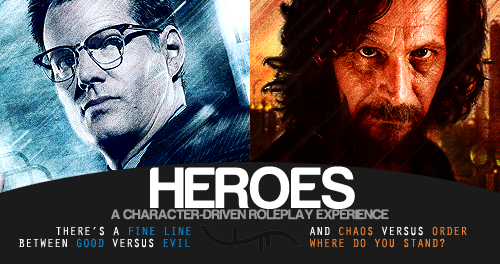 For centuries, humankind has had a secret. A secret that, if revealed, would change the world as we know it, and shake the very foundation of what it is to be "human."

We have been evolving, and that evolution has granted us abilities far beyond our fellow men and women. What would usually be deemed impossible is, in truth, far from it. Teleportation. Levitation. Telepathy. Regeneration. Telekinesis.

Over time, some of these individuals have come together, pooling their resources and their fantastic abilities together to serve certain goals. The Company has tracked dangerous 'specials' for decades, capturing and, if necessary, imprisoning them so that the rest of the world can be safe, oblivious to who walks among us, and what those people are capable of.

At one time, the government was brought into it but Homeland Security failed hunting the individuals with superpowers. Their tactics are more extreme than The Company's. They would kill if threatened, rather than just imprison. This caused rebel groups to sprout up everywhere in retaliation of the governments actions.The government lost.

Now a new threat arises. Terrorism replaces peace and the anonymity of Specials is severely threatened as a rogue group of them takes the stage and attempts to rule the world and advance their evolution through war. Specials are forced to decide what they will do. Will they join their own kind to advance humanity or protect the innocents and try to keep the world from breaking down? Which side, if any, will they take?

Which side will you take?

"And if we have the strength to be honest, then what we find there, staring back at us, is our own reflection, bearing witness to the duality of life. And each one of us is capable of both the dark and the light, of good and evil, of either, of all. And destiny, while marching ever in our direction, can be rerouted by the choices we make. By the love we hold onto, and the promises we keep."

Heroes: The RPG is an active play-by-post role-playing forum that has been successfully running for over SIX YEARS! We're open to all levels of writing ability, and knowledge of the show is in no way required to join the game. We're always looking for new members, and it's always easy to hop into the game, but with the start of our own unique Volume Six: With a Whimper, it's an especially good time to join! For everyone from never-having-role-played to literate RPer, and from never-watched-the-show to hardcore Heroes fan, this RPG is the place for you.