The sun was out and basked the world in a light heat. Each person was dressed for it and the conversing was what brought them to their seats. Lines of rows with numbers under them. It was an interesting sight to her. Never before had she been to something this massive; other than a church sermon or two. What was it like- to be human/ She wondered if only briefly before her eye told all. It was to wallow in sin and long for a greater power to cleanse them. That was her job. She was here to purify and in such a collection- perhaps she could maybe find even one soul which wanted to be saved? The thought eased the tension in her stomach some.

An auction. Of all the places an angel to be, this was the unlikely of them- yet she had her heart set on a certain item. Her blue eyes stared sternly at the items as they went by and were bought away- yet as the day passed, she saw not what she sought. How cruel of fate to make such a simple item dance away. It had only been a night for her and yet the item seemed to have vanished. No one made music boxes anymore- and the ones she COULD find were far more expensive than she could ever hope to afford (especially since she was an angel and had NO money). It didn't harm her any to wish for something so simplistic and unlike some of her siblings she wasn't partaking in the humans as others might have. Instead; she stood fascinated in the crowd by their growing culture. In the blink of an eye they had evolved and so had some of the things she had come to enjoy.

It would be okay, though. Greed was not to her, so she could live without getting what she wanted. All she had to do, was give to him (her lord) what HE wanted and that was angels. She could purify his people for him. In fact it made her better to wash people clean. As she closed her eyes the odd design on her eye died away. Things weren't measured for now. Looking upon the sea of darkness before her made her a bit anxious. In this crowd, she'd likely only rescue a few. For now, she needed to wait until the end. With her body parked at the end of the row, she stared on.
_________________

You know, coincidence is a strange thing. As simply as an Archangel had come to visit this auction, so too had an Archdemon, walking the Earth to find amusement. Sure, he had his realm back within Inferis; but was it really all that? He'd left minor instructions to Analee to do with housekeeping while he was gone, but he was certain that nobody would come calling while this Demon was out playing in the Mortal Realm. With a soft sigh, he stared quietly at the humans all clambering to purchase their coveted objects for the lowest possible price. Greed was a funny thing, and yet still apparently seen as a sin.

But Ba'al knew differently--Ba'al believed that the only sin was to lie to oneself; to not be true to the vision of the self that one placed upon their own heart. It was obvious, sure, that the supposed 'Seven Deadly Sins' still existed; but they were no sins. They were mere artifacts of human nature--they were felt not only by humans, but by demons and angels alike (even if the Angels would refuse to admit as such). Golden hair was brushed back slightly and red eyes took careful note of each of the items on sale: and then he noticed it.

A music box. The auctioneer explained, in English, that it was of Sumerian make, and played a melody from that time. Even if it were not of his Demonic mind, the original human within Ba'al almost wanted to reach out and grab it. He had the money--he had all the money in the world. All he needed to do was reach his hand into the air, correct? 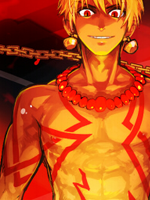 A music box. There it was. The thing she'd been looking for- of course they would have one. That was the very thing she'd been looking for! Her hand rose to bid, but then she realized- she was Earth-poor! Currency! Curses! Why did humans have to create it! Why didn't they still barter? Well.. then again, it wasn't like she had anything to barter anyways. The downfall of being poor! Well not really poor- since there was no money value in heaven- sometimes Earth was so complex.

Either way she sat there and ground her legs into each other like she really had to pee, but her eyes were locked on the box. It was hypnotizing almost. The form was beautiful to her and the way it sang was simply beautiful. It was strange to want, but she did. Staring at something through a glass case was difficult. Look- but don't touch. Her only thing was salvation: her job- her rule. It was everything she was. So, instead, she was stuck simply dealing with the want in her stomach. Most uncomfortable.

"One Hundred," a man spoke. Uriel couldn't help but look at him. Though it was mostly unintentional, she couldn't help but glare. Her eye activated a moment to scan the man, but was utterly.. astounded. The readings were (over 9000!) unbelievable. She hadn't seen such amounts since she'd met him. Was it possible it could be the same being? Her body ached from the memory alone. She could feel the bleeding if only as a memory. Jealousy? Was that a feeling? However, the emotions tamed and she continued to stare sternly at the box, silently wondering if anyone else would bid for it.

With something so wonderful- why wouldn't they? Yet as the calls were made- she acted on impulse. Her body rose and she waved her sign. "One hundred and ten!" What- had she just said? She didn't have any money... How would she even procure such amounts?! Well there were earthly jobs of which she could probably find one and earn it maybe? Didn't those need paperwork...? Oh well... she was sure she could figure something out... maybe.
_________________