ALL OF THESE THINGS. EXPLAIN THEM.

ALL OF THESE THINGS. EXPLAIN THEM.

Well then, even more odd than the voice commanding her to leave her post after several million years, Azuriel heard ANOTHER voice, now telling her to leave South Africa and go to some place called Vatican City. Whatever that was. In fact, Eden's Guardian had no idea what South Africa was. Or Africa for that matter. The world had certainly changed. Further, it seemed she had to get to figure out where this "Vatican City" was. Which left her with no real idea as to where to go, but that didn't matter too much, as she just sort've poofed into some weird messed up version of Johannesburg, which she ASSUMED to be Inferis. Aaaaaaaaaand, she had absolutely no idea how she'd gotten there, why she was there, or how to leave. Though there was a feeling in her brain she KNEW where to go. So, waving goodbye to Seejay, who seemed to follow her here (he probably knew the way out anyways, it was chills) she darted off, soon breaking from a sprint into FLIGHT as she shifted into her angelic form, zooming off at one hundred and sixty miles per hour. She soon arrived in some place with... A giant mountain that was very thin and tall!? WAT IS DIS. But before she could determine where exactly she was, she wasn't, for she had been forced back to Earth by some unknown means once more. HOW ODD. But no longer unexpected.

What WAS rather unexpected though, was the fact she appeared ON A WHITE ROCK THAT WAS SMOOTH EXCEPT FOR LOTS OF CRACKS, AND VERY FLAT. And there were a lot of LARGE THINGS MADE OUT OF MUD BLOCKS AND SEE-THROUGH PANES. And all around her were INCREDIBLY TERRIFYING GIANT BEETLES WITH CIRCULAR LEGS, WAT IS DIS. Well, she still had no idea how she'd really gotten here, but hopefully things would clear up sooner or later. But... SO MANY PEOPLE. WHEN DID THEY HAVE TIME TO BREED LIKE RABBITS!? OH. RIGHT... ALL OF THE TIME... It was so odd... But as she pondered the oddity of humanity's MASSIVE GROWTH since Adam and Eve, she just so happened to bump into a FACE. One that seemed very familiar, in fact... Huh. Odd. She waved!~ HELLO ODDLY FAMILIAR PERSON AND FRIEND.
_________________
Azuriel speaks Angelic. Yep. Just Angelic. :| U mad?
On Earth, communicates in Improvised Sign Language when needed. 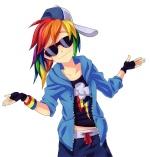