New Years. Just moments before, it had been the highlight of the night for thousands of people in the human world. All throughout Sweden, Europe, the world, people were celebrating the dawning of a new age. They celebrated potential fortunes for themselves, doom for their enemies, praise for surviving to see a new dawn. It was Anno Dominae 2012 in Helsinki, and all of humanity celebrated the promise of the future.

In stark contrast, the realm of Inferis was just as black and as dark as it always was. Dark storm clouds like a hurricane potentially waiting to happen covered the black skies. A great tide of darkness proceeded to engulf all of existence like a choking virus waiting to take hold. It was night in the Black Sea, and upon the surface of the islands there was hardly a sound.

But if you've seen Inferis once, you've seen it a hundred times, and Dr. Eisenberg has seen it more times than he could count.

The good doctor, as he often referred to himself when he dared to feel confident about something, was making a very important 'business trip' to Inferis. There, in his Mark 049 Assault Variant armor, he made his way across the pebbly ground of one of the many islands within the Black Sea. Most of the landscape, naturally, was covered in ruins. The few demons that did wander on these islands were relatively docile and cowardly compared to their brethren elsewhere, but that was because these were the surface dwellers. Eisenberg knew for a fact that the real danger lay beneath the waves not 20 feet away from his left, and he did well to avoid it when necessary.

Around him, his frightened employees began setting up camp. They were here temporarily, of course; a minor inconvenience. They could not exist in the realm of Inferis long without stirring trouble. Their primitive but relatively effective transportation devices, designed similarly to the primitive crossgear used by the older Templars of WWII and essentially refurbished to match today's modern technology, were only designed effectively as temporary jumping devices. When they reached a certain time limit, when the gear was losing significant power, a forced jump back into Earth occurs. Few were ever capable of surviving such an attempt, though through experimentation and trial-and-error, Eisenberg managed to create a device that would allow for survival for up to a quarter of an hour. It wasn't up, but it was more than enough time to set up his operations.

"We are finished sir," one of them said in his native German, "We will be ready to depart soon."

"Good," the ancient man replied, his voice metallic and impossibly old from behind his suit's transparent visor, "Get out of my sight. Prepare the Panzerkampf and ready our men for departure when I am finished here."

The men nodded and quickly began to leave, flashing into nothingness one by one. It was just as well; the old German researcher did not wish for distractions...or bait for demons.

He grunted a little and instinctively reached for pain in his left side...only to remember that there was nothing for him to scratch at. His suit hid the fact that beneath his metallic exterior lay barely any flesh and bone at all. Most of him was metal, attached to his own suits through machinery designed to act as replacement legs and body parts and function as if he still had a fully capable body. He grunted in disapproval.

Eisenberg looked up, his eyes greeted to the familiar shape and appearance of his oldest of comrades, perhaps the only thing he could even consider a companion...even if barely. Warmachine, the ancient mechanical demon he was bound to, stood dutifully nearby; ready and waiting to obey any orders its master wished it. It had taken countless years of research, decades of biological and neurological enhancements to his own body, to bind Warmachine permanently to his physical will, but it was worth it. They were inseperable.

"Only ghosts, Warmachine," he replied, "Guten tag. Begin a scan of the area."

"At once, Master Eisenberg," the demon stated. Its single eye began to scan the area, acting as an extra set of sensors to Eisenberg's own that served to aid him in his quest.

He was searching for something. Almost 70 years ago, in that dark age that many state with a sense of awe as the Second World War, the German 3rd Reich's secret agency known as the Eisenhammer created an outpost in the Helsinki area. It's purpose was to help push Hitler's research in the supernatural and, essentially, was a branch of his own research division in Cybernetic Ritualism...which, conveniently, Hitler forgot to mention to the good doctor. The ouptost had succeeded in testing a device that essentially acted as a powerful form of crossgear, sending multiple individuals from this plane into another through the use of Cybernetic Ritualism. From what was understood from the remaining project files, the experiment worked...though too well. An entire apartment complex had vanished into thin air and there was no trace of the scientists involved. It had been given up for lost; an apartment complex could hide easily in the depths of the Black Sea, after all; but Eisenberg wasn't one to give up so easily...

And, even now, his efforts were proving to be effective. A chunk of concrete and mortar bricks sat not a few feet away from the makeshift campsite. It had taken but a few examinations to determine that the chunk of material came from an apartment building dating back to WWII Helsinki...though where the rest of it was, that's what Eisenberg was here to find out.

A pounding of feet splashed the distant waves from one German ritualist, as a small pack of Kelpies roamed, their decaying flesh casting a terrible reek onto the water at each step. Eyes of flame glanced around, as their snarling toothed mouths dripped with saliva; the beasts hungered flesh. There were two of them, dashing along the banks of the shore. They could smell humans. They wanted them. Bad.

Meanwhile, much closer to the humans, about three Penguins waddled about, each wearing gaudy glasses and ugly scarves, loudly muttering "HAHA. DOOD. DOOD. GNARLY, DOOD, RAAAD." amongst one another in their annoying voices, quite similar to the titular Beavis of Beavis and Butthead. Spotting the ritualist, they waddled over, all standing away from him, at a distance, before one of the annoyances spoke up.

Pushing his peace-sign thick-rims back onto his beak, it sort of giggled as it spoke. "Mnyehehe. Hehe. Hey, hey, dood. Dood, uh. Mnyehehe. You a mainstreamer?" And thus erupted a chorus of annoying laughter from the demonic Penguins.

In all honesty, the penguins were very much soccer balls of Inferis. They had no real point in existing, and were mostly cannon fodder, if not cannon balls, if one could gently grasp them well enough. They made a splendid distraction for the Kelpies as they closed in on their prey, hiding in the ocean waves and the shadows, out of sight.

The penguins weren't so tactful. They continued laughing annoyingly at the man, and waddling around, generally making a noise and a nuisance of themselves, as they were whim to do. Luckily for Albrecht, they were keeping their distance, partly to avoid dying to death, but also thankfully for him, so they wouldn't explode him to death by accident.

"Mnyehehe. What're you even doing here, mnyehe? Snort, mnyehehe, only mnyehe, lame mainstreamers, snortsnortmnyeh, go to Inferis, dood, mnyehehehehe!" And as the penguins joined in a choir, waddling slow circles around the man as they shrieked "HEEPSTER, HEEPSTER!," they flailed their flippers. There was probably a reason that they didn't have a very long life-span.

But as the penguins threw a small, and incredibly stupid, party around the ritualist, the Kelpies slowly approached, using the dead of night as cover, patiently witholding their anticipation for the satisfaction of tearing through his flesh and bones with their razor sharp teeth. But they wouldn't reveal themselves yet...

It was far too much fun to stalk their prey... 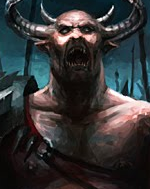 Albrecht focused his attention on his scanner, studying the landscape of the island as he examined the surroundings. He was looking for anything in a particular shape; a specific ruin, perhaps a full foundation or even a chunk of a building. Anything to help find the location of what he was looking for. He completely ignored the other buildings; the ones that were native to this place. What he was looking for was a specific construction and layout. Based on the location of the debris he had found, he specifically was looking within a certain diameter, with a diameter of about 100 meters.

Eisenberg knew they were there by the familiar sounds. The damned birds were little more than an annoyance at best. A joke among the demon world. Of course, if they got too close, they could always explode and send them into tiny little pieces. But despite this the old German Scientist didn't even bother registering their presence.

"They are not an issue, Warmachine," he stated, "Keep a scanner on the water though. If anything approaches us while we work, do not hesitate to attack."

Eisenberg approached the interior of the island. His arm cannon was online and registered at full power in the event of a sudden ambush. Anything could happen in the realm of Inferis. He was not afraid though; he doubted that he could feel much in the way of emotion beyond depression or triumph anymore, the organs responsible for emotion likely damaged and replaced long ago. In fact, he welcomed death; any chance he could get, he knew that he wouldn't not hesitate if death opened its doors for the old German researcher...

However, love and determination's beckoning was far greater.

He managed to detect something further in. A reading? They were in luck. Thus far, things were going according to plan.