Countless visions of glory and plunder swam through Taiwei's mind as the ship he stowed away on arrived at Kowloon Public Pier. Famous ancestors outmatching the Qing and bringing the Portuguese to their knees, feats of piracy Taiwei could only dream of for his people. The dropping anchor jolted him back to his senses, and he remembered what he came for as if from a lost dream. As he strode onto the gangplank, dock workers stood in awe at his grizzled appearance, and none dared to question the legitimacy of his passage. A messenger from his dear brother Huangwu had dropped a strange missive into his alms bowl back in Honshu, urging Taiwei to broker a deal with the Sun Yee On Triad. Taiwei had a vague idea about his directives, but the purpose of the deal remained unknown to him. "The handwriting on that letter was strange, but there's no way anyone else knows of our existence. This is probably a trap." he thought to himself. He started to formulate a counter trap as he approached a shady building in Yau Ma Tei, but Taiwei's mind was preoccupied thinking about who had knowledge of the wokou. "Could it be the Templars?" he wondered. The night moved in like an unexpected rain, and firecrackers began popping in the distance as the Chinese New Year festivities began. The cacophony of explosions facilitated an epiphany of sorts. "This could be the perfect cover for some traps, the authorities will never know." mused Taiwei as he began mixing a tried and true wokou explosive in his alms bowl. With some grain he had saved from begging and phoenix wax he kept in his basket, he fashioned seven clumps of flash wax, ignited by the slightest spark. Surveying the empty street, he attached the wax to strategic points in case he needed to make a quick getaway, making doubly sure he wasn't being watched. Confident in his numerous routes of escape, Taiwei turned his attention to the building itself. It was a decrepit two story apartment with windows on the second floor, and a front and back entrance on the ground. Several clotheslines and pipes bridged the building and connected to other apartments. Taiwei couldn't deal with the most powerful triad in Hong Kong with beggar's clothes, so he donned a business suit from a nearby clothesline and concealed his pestle in the inside pocket of his surcoat. He stowed away his rattan basket in a well hidden ditch and placed his bowl near the entrance. The blend of light and shadow on the carefully chosen location, and the natural dark color of the wooden bowl made for a fine hidden trip hazard. Taiwei made sure all of this was done in secret, moving in the shadows and avoiding lines of sight from the apartment. Picking up a discarded metal scrap and noting the position of the bowl and wax globs, Taiwei steeled himself for the worst and entered the building's front door.
_________________
Wokou (white) -A mixture of Pirate Chinese, Korean, and Japanese.
Pirate Chinese (orange)
Pirate Korean (yellow)
Pirate Japanese (red) 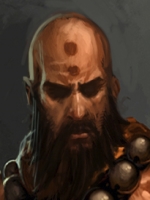