It probably wasn't a good idea for Ana to go to the Black Sea.  She didn't know much about it or the demons within, except the prinnies.  To Ana, they were adorable, but of course she learned her lesson from last time she tried to hug the explosive penguin.  Not a good idea- it took a while for her body to recover from burns.  Instead, she very lightly pat them on the their heads.  VERY LIGHTLY, as to not accidentally set them off.

"Hey DOOD."  One such prinnie asked, looking at Ana.  Its large penguin-y eyes were staring at her; a bit confused how to act about her.  "What are you doing here, DOOD?  Aren't you from a different area?"  Well he was a smart little penguin!  Ana smiled at him and nodded.

"I'm kind of a wanderer though!  Not much of a home."  She tilted her head, her red hair splayed downwards.  She held herself in her smaller, less menacing mortal form, so her clothes were those of a slave.  Shackles rested on her ankles and wrists with thin chains trickling down a good feet each.  Her feet with were bare and a bit dirty.  Her eyes watched out at the black sea.  "Are there leeches in there?"  She asked.  Really, this domain was the one she knew the least about.

The penguin shrugged and looked out.  "I don't know, DOOD. I don't go out there."  He rummaged in his pouch and pulled out a loaf of bread; starting to munch on it.  "I wouldn't advise you to go out there, either DOOD."

Ana blinked and nodded, but ignored the warning and stood up.  She walked out on the dock and grinned.  What did this water feel like, she wondered.  Her green eyes were locked on the miles and miles of ocean out before her.  She shifted and sat at the edge and dangled her feet.  The water felt a bit gross, but that was to be expected from any such Inferis area.  Nothing was clean and pretty, but it was definitely a perspective view.  She kicked lightly like a child playing.
_________________

The Black Sea was tranquil tonight, and to bear witness to such peacefulness was a peculiar thing in itself. The great Archdemon of the Seas was a fickle mistress, her temperament was usually as eclectic and as unpredictable as the depths she commanded and dwelled within. On a typical eve such as this, the foul, stagnant waters would have been churning ceaselessly, rolling in great waves in their attempts to claim the lives of those foolish enough to venture too close; but it seems the mistress Leviathan is currently in a calm frame of mind. How long this would last, no one could say.

But Edward Teach was not here to gander at the sights. The presence of a robust and ornately furnished flintlock pistol between his meaty fingers was evidence enough of his underlying intentions: the Demon pirate was on the lookout for danger, prepared to serve up a generous helping of lead to anything or anyone foolish enough to make an attempt on his unlife. When you're as notorious as the dreaded Captain Blackbeard, rest and relaxation had a tendency to become far more valuable in their general context.

A few cursory glances here and there, however, were nearly enough to cause the pirate, who was wreathed from head to toe in a mantle of thick, billowing smoke, to lower his guard for the briefest of moments. Scuttling about in his periphery were somewhat decent numbers of those irritating blue penguins that wandered around the Black Sea; judging by the lot of them, either there had been a sudden influx of the peg-legged bastards or they were all gathering for a purpose—hopefully it wasn't to cause said influx. Blackbeard narrowed his eyes into a threatening glare and grumbled peevishly at the thought, cocking the hammer of his archaic firearm.

A few more minutes of walking down the edge of the water-soaked, barnacle-infested harbor and he would find himself standing at a junction leading near a series of docks. Blackbeard scanned the environment like a hawk, deliberately ignoring the penguins due to their general harmlessness (albeit annoying personalities), until his eyes landed on a presence he hadn't encountered before. He took a step forward, his boot creating a resounding clud against the wood as he studied the mysterious figure, a female, that sat with her legs dangling over the pier.

Such revealing clothes... They were gorgeous, yet impractical and far too thin for adequate protection against the cold winds of the Black Sea. Her hair flowed in this breeze as though it had been lifted from a watercolor painting; long, rich and full, colored in the most beautiful shade of magenta he had ever his eyes on. And her skin was fair and delicate, and rested perfectly against her dainty body without so much as a single blemish or scar. Perfect in every way imaginable. To call this female beauty an angel would do her no justice, for Edward knew she was not so. Angels did not dwell within Inferis.

After taking a few more steps onto the dock, the pirate approached the she-demon as he tucked his pistol inside the red sash wrapped around his waist. He half expected her attention to be glued on the horizon, but the sudden appearance of his cloud of smoke would assist in attracting her attention. "Pray tell, young lass," the pirate spoke with a bit of an old English accent, even though he loosed his words in the Infernal tongue. "What's a delicate flower such as yerself doin' here, meanderin' through these treacherous environs by yer lonesome?" His mouth was curled into an amicable smile, his clearly rotten, plaque-infested teeth visible the entire time.
_________________
Crude English | Spanish | French | Infernal 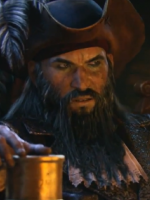 Smoke? Why- was there smoke? Her large green eyes rose to search the endless sea for the source. Naturally, where there was smoke- there was fire. Unfortunately, the fire was yet to be seen. Instead, she found her eyes raising to meet a rather burly man. A demon- of course, but he looked like he had once been human. Now that wasn't uncommon in Inferis, but out on the sea- it was less common than other places- wait most demons were in demon form while out and about. There was plenty of room all around so it wasn't like they'd be restricted.

However, just like Ana, there were those strange cases of demons that just looked like humans. As odd as it was, there were more of them than most people would think- ANYWAYS- Ana was greeted by the nice man who looked like he needed a dentist- but again- a demon didn't need one.

The way he talked made him sound a bit older than her, but Ana didn't mind because a lot of prinnies were older than her too. Her green eyes were wide and set upon this guest of hers. Being called a flower definitely was new to her and made her blush a bit. It still wasn't something she was used to- she doubted she'd ever be used to it, really. Most of her life or death was spent being called WOMAN, which could have been a lot worse to be honest.

The pirate observed as a twinge of red washed over her cheeks, a telltale sign that she was partially taken aback by his earlier compliment. Not only was she far more attractive than any woman he had ever seen, but she was shy, too? This must have been fate. "It's nice to take walks." The young-looking, red-haired lady responded. "Besides, you get to meet all sorts of interesting people when you do!" Teach roared out a hearty laugh as the smoke that wreathed and snaked around and all over his body continued to billow out from some foreign source. "Aye, lass! There be plenty of int'resting folks that roam these here waters." Blackbeard reiterated.

He stooped low enough until he was crouching, staring the she-demon right in the eyes with a strange form of passion, a kind that could only be sparked by a desire for adventure, or at the sight of a person with qualities the looker found to be most captivating. "If I might be so inclined to ask," He continued on, slowly and gently gripping the delicate hand of the Demon that looked human, holding it between his own great, meaty fingers. "Where is it you hail from, lass?" Another smile, riddled with all sorts of tooth decay. "Certainly, whatever Archdemon yer soul be consigned to must be worried sick t'death."

More of the peg-legged penguins entered and left his field of peripheral vision. Bothersome creatures they were...

"Where is it you hail from, lass?  Certainly, whatever Archdemon yer soul be consigned to must be worried sick t'death."

Well to be honest he probably didn't.  It was a sad fact, but Ana was over it in a minute, because she just learned to accept that not many liked to be around her, due to her chipper outlook in a gloomy place.  It was mainly annoying, since most people were trying to be miserable and suffer.  Oh, well.  At least she was happy- even if everyone else wanted to be cranky.

"I'm from Darkroot.  It's okay though.  Master Ba'al doesn't really miss me."  She had an oddly chipper voice about it.  Ana was always chipper though, so again, not really odd.  "I also doubt he's dying.  He is really strong."  Her lips were pulled into a genuine smile. She couldn't help but blush though.  The eye contact- the hand touching.  It was a rarity for Ana to have such attention from anyone.

"I'm Ana, by the way."  For some reason she felt like giving her name.  Naturally she never gave her full name, because well it wan't like anyone called her Analee anyways.  Her eyes closed as she continued to exude the happiness she always felt.