I'm Breaking Up With You! (Gabriel)

I'm Breaking Up With You! (Gabriel)

Momo was a decadent affair. With an outside terrace on Heddon Street and an interior of intricately carved wood, filigree metalwork, sumptuous fabrics and subtle lights playing on crystal glasses, the atmosphere at Momo was both intoxicating and seductive. Which was one of the reasons why it had such diverse clientele, from well smooth business men with expensive watches, to dressed up couples and babies in buggies Momo was a popular spot for just about anyone who enjoyed good food and a good time. This of course didn't matter to Mr. White, no he had chosen it for another reason entirely.... That reason being it was one of the most romantic establishments in all of London. The booths where small, almost forcing those who ate in them to touch in one way or another, the lighting was dim and sensual and the music... Oh yes the music they played was soft and bespoke quite emotion. But whats more, each and every table held a a vase with a single red rose and a candle that helped lend to the intimate atmosphere.

It was this intimacy that White had wanted to create, to share with the person he was about to meet. And because of this he wore what he considered his "Sunday best". A fine Alexander Price piece made of the most sumptuous fabrics and decadent materials. The dark clothing set off his pale skin in such a way that most women and even some men had been know to faint at but the sight of him(Allegedly), but whats more he wore a fine pink tie and shoes so polished and so black that they seemed to drink in the very light of day. This was what White had not so jokingly named his lady killer ensemble, claiming that with just his looks alone he had once killed a very lovely young princess by the name of Diana in that very suit. OF course this has never been proven, but the fact remained that no one could disprove it ether.

And so White is his best suit, sat in a small but not cramped booth and awaited his dinner partner. This guest of course had been informed that they where to wear nothing but their finest anything less would have put them out of place, and it would have just been plain rude. As he waited though White waved over a waitress. "Oh hun I hate to bother you before I'm ready to order, but do ya think you could bring over some wine? I don't care what vintage so long as its a red, but if you could match it up with oh... some sort of appetizer? Yet again I don't care what appetizer, so long as you think its good. Thank ya soooo much!" With that he patted her hand and turned back to look at the door, this was the worst part of any date... The waiting.
_________________

Ah, London. Her streets were definitely beautiful on this fine evening. One man skipping down the paved roads, however, made the scene all the more beautiful. The night called out to him as he danced about the splendid scenery, behind his shades appearing to look about at the various lights and signs in awe. All part of the show, but Gabriel was having fun.

The agent hopped his way across the street to the entrance of the romantic establishment he had been invited to. Knowing that Mr. White was worth only the best in making preparations, Gabriel had worn only the best he could afford while out shopping earlier in the day. A fine, black suit, trimmed perfectly to match his body's movements. Matching fedora in hand as he entered Momo, he made sure to wipe his black suede shoes off on the mat before approaching the front desk.

"Excuse me," He tapped upon the desk with his index finger and awaited a response. The waiter attending on this evening had sampled a tad too much wine, but he was still doing his best to please. Once the whole blindness explanation had passed, the agent was escorted to the booth that Mr. White had been seated at.

"It's always a pleasure to be out with you, you know that?" Gabriel passed his superior a smile as he sat and crossed one leg over the other. He never really held too much interest in White, to tell the truth, but the man could definitely pick where his meetings would take place.

"For what reason do I have the pleasure, sir?" As the waiter returned with the wine White had asked for, Gabriel removed his glasses and held his glass out eagerly. After it was filled, he wasted no time in wetting his lips with the rich, red liquid. After but a sip Gabriel pursed his lips to the edge of the glass before adding, "Surely you aren't trying to woo me."
_________________ 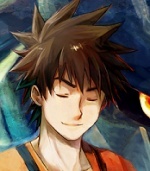 Keen, inquisitive eyes fallowed the well dressed blind man as he was shown to Whites table. He took in the other mans dress, from his suit and tie to the little accents of color placed here and there... And he had to admit the man had style, of course that could well be attributed to him being a flaming homosexual. After all faggots such as him had an innate understanding of fashion, something of which White was slightly jealous of... He had to work for his understanding of what made him look like a sexy beast. Not that he had to work all that hard, but in the end any effort was to much effort at all. Of course being gay probably took a lot of effort as well, not that he knew of course, White was as straight as an arrow fired from a re-curve bow, allegedly. Which was to say, it curved some. He was an equal opportunity lover after all, though what he used to penetrate someone changed depending on gender. Women got the capital D dick and men got shived... With a shive. Kinky right?

"It's always a pleasure to be out with you, you know that?" The man sat down and crossed his legs in the most unmanly of manners, causing White to both cringe and shiver. How did any male manage to do that? White just didn't understand... Maybe this fellow before him had a highly evolved prehensile penis? That would certainly explain a few things." Oh really now? Let me guess... Its more for the local then my oh so charming company?" For what ever reason, the head of Blackhaven enjoyed meeting with his subordinates in extravagant locations. From five star restaurants, to circus's nothing was off limits for these spontaneous meetings.

"For what reason do I have the pleasure, sir?" The smile on the worlds greatest spy(Allegedly) was enough to light up a room, of course his dinning guest couldn't see it so most of the effect was lost, which was only slightly disappointing. "Surely you aren't trying to woo me." A faint chuckle fallowed those words as White spun the wine around and around in his glass, letting the acidic and pleasurable smell of the alcohol waft to his nose before he took a small sip, sighing in pleasure as he did so. "Ah it seems you have found me out my Gabriel, but knowing that wont save you from my tender embrace. Of course, before I can get to that pleasurable pass time we have business to go over. After that well... I will try my best to woo thee!" Of course, if this talk went as he thought it would... It would end with dear old Gabriel getting the S. No one ever wanted the S. That alone was enough to make White wonder if others didn't like him. "But before we start, I would like to make a small toast... To lost family and kin! May we see them again. Sooner then we expect."
_________________