”Surrender now or be counted with the endless masses that I will defeat.”
NAME:
– Artakhshathra, the Thundering Black Conqueror

DESCRIPTION:
– An inspiring yet terrifying visage to behold, birthed directly from Alexander the Great’s impressive and lofty reputation as a military strategist and a fearsome warrior in his own right. One could accurately say that the king was a real Demon on the battlefield, and the existence of this Inferis Morph, this being—created through the combining of Marcus and Alexander’s very bodies and spirits—serves to accurately illustrate this image in broad daylight. Artakhshathra can best be described as an intimidating man at 7’ in height and completely decked out in a suit of armor of the sheerest black, trimmed with gold accents, with a helmet crafted to feature a pair of threatening, elongated horns, completed with the addition of a long, flowing cape that hangs from his shoulders and billows behind his body as though it were made of smoke. In the place of two eyes are hazy azure voids that seem to crackle and spark as if though a thunderstorm rages behind glass walls.

SKILLS:
– As the first of many Inferis Morph transformations to come, a tall and menacing form such as Artakhshathra’s can only imply that this figure exists for one purpose and one only: to overwhelm his enemies through means of sheer power. He comes very well-equipped for the front lines where the action is thickest, armed with the mighty Gordias in his right hand and a medium-sized, polished metal buckler strapped against his left arm. But where he excels in both strength and defense, he falls short in terms of speed. Artakhshathra’s ability to move about, and by extension the swiftness of his attacks, is somewhat hampered due to the weight of all the armor he wears, but his athletic skill and dexterity with his weapon receives no such penalty.

[ BATTLE ARMOR ] Anachronistic as it may appear to be, the Conqueror’s opulent suit of armor was designed for the intention of helping its wearer survive heavy melee combat. As such, its metallic composition and exceptionally sturdy craftsmanship insures Artakhshathra with enough fortitude and durability to withstand even the most punishing of blows, from blade cuts to blunt force trauma, it even offers good protection against projectiles such as arrows and bullets. The gauntlets and greaves can also function in a similar manner as brass knuckles, ergo helping to improve the sting behind his punches and kicks, while the lengthy horns that sprout from his helm make for the perfect makeshift tool for goring an unsuspecting foe.

[ MASTER SWORDSMAN ] Artakhshathra possesses excruciating levels of skill and adroitness with a blade, and he easily demonstrates this expertise with his mastery over Gordias, the Blade of Conquest. And while most of the attacks he delivers with the sword leaves much to be desired in regards for speed, each stroke and parry is made with the infinitely refined precision and momentum of a veteran practitioner, easily compensating for such a flaw. Further enhanced by Alexander’s oceans of knowledge and experience in many battles, the Conqueror truly lives up to his nomenclature no matter how you ‘slice’ it.

[ HEROIC SPIRIT ] Resultant of the combined personality aspects of both Marcus and the Ancient Macedonian Demon-king he is bonded with, Artakhshathra is gifted with supernaturally potent levels of charisma and personal allure—and it practically bleeds from his body. To lay eyes on the Conqueror is to gaze at the physical embodiment of leadership and bravery, and to claim witness to such excellence on the battlefield encourages and inspires others to make his determination and spiritual fortitude their own. Anyone within 50 feet of his current location that Artakhshathra personally sees as an ally to his cause will be instilled with a lasting compulsion to stand and fight alongside him for as long as they remain in the affected space, empowered with a deep-seated sense of fearlessness in the face of all adversity and the drive to see the Conqueror’s ambitions through to the end.

[ ZEUS’ FAVOR ] Ever wonder why the Conqueror’s eyes surge and glow as if he were made of lightning? This peculiar bodily trait serves as a clue to the function behind this ability. Artakhshathra has the impressive power to absorb all forms of electrical energy into his own body as if though he were a living conductor, passively rendering him completely immune to damage from any source that generates or discharges electric power, from high-voltage power lines to a bolt of lightning. Due to Marcus' inexperience as a Ritualist, however, the means to control and manipulate the energy he absorbs is beyond his grasp for the time being. Perhaps in the near future, he will be able to fully harness the tempestuous powers of a lightning storm?

[ INFERNAL STEED ] Once per thread, Artakhshathra can create a short-lasting dimensional torsion in order to call forth Alexander’s Infernal steed and greatest companion, Bucephalus, having joined his rider in the afterlife due to their vast experience together in the heat of battle and underwent his own form of Demonic metamorphosis (see above image). Bucephalus himself takes the form of a massive war horse with jet black fur and a bloody red mane and tail, dressed in a harrowing set of special equine armor. The stallion’s eyes are little more than hollow red sockets that smolder like hot coals, and each beat of his great hooves resounds with tremendous force. Artakhshathra can either dismiss the beast to leave the material plane on command, or he will automatically depart of his own accord if he suffers enough cumulative damage as the thread progresses. When pushed to run as fast as he can, Bucephalus can reach record-breaking speeds of up to 135 miles per hour—far faster than any normal horse can accomplish.
_________________
English
English | Ancient Macedonian | Koiné Greek | Attic Greek | Egyptian | Persian | Infernal 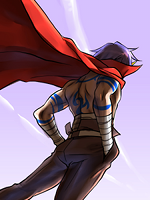 When speaking at the same time with her twin, they use mediumpurple no matter the language. Depends on the context and what they've been speaking before.

When in Inferis, they use italics with an appropriate color coding for the language when speaking telepathically to each other. :|