First day on the new job. Merlin wasn't excited, per se. Well, maybe. To him it was a paid job that would get him out of his dinky studio flat into something a little nicer. Definitely better than living back home again. He loved his parents, but he was not moving back to his childhood bedroom. So that explained while he was on the Tube heading to his new job. It was at some fancy-named lab; a cover for the Templars. Apparently in order to garner revenue they had legitimate businesses so they could more carefully work on their more private affairs. Not that Merlin really had any idea about said private affairs. He knew he would be working on identifying some “special” specimens or other such business. Merlin didn't really care all that much. It was a job and it was something. He would work with it. Deep down he was a little excited to get his own lab. But that was smothered under his now-usual appearance of apathy.

Sneakered-feet stepped off of the tube and went on the brisk walk to the lab building. Jeans and a loose t-shirt completed his outfit, which garnered him an odd look from the security guard at the entrance. He flashed his security badge and went on through to the elevators. As he was instructed, Merlin entered the elevator. He scanned his security badge and pressed the “B3” button. The elevator closed and down he went. When the doors slid open again he was in a stark hallway. Again, as instructed he took a left and went down four doors. There was a plain door with a name tag next to it stating: Merlin Pryce. He scanned his security badge again and heard the door click as it unlocked. He opened the door, swearing as he whacked his shoulder against the doorjamb. Stupid lack of vision! Merlin leaned against the door and looked into his new lab. Everything was shiny and new, lots of open space along with the latest gadgets. There was a desk near the door with a computer and a couple pegs where a starched, white lab coat hung. Maybe this job wouldn't be so bad after all, if his new “office” was any indication.
_________________
Speaks English (#617C58) with a British accent, Latin (#C68E17), Spanish (#7D0552), and is learning Demonic (#FDEEF4). 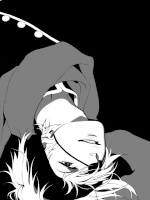