Annoyed. So fucking annoyed. That was the only words Yuuko could find to describe how she felt right now. Delayed, the god damn train was DELAYED! She had been standing there for about half an hour now waiting for the stupid thing, and now the fucking announcement lady or whatever tells them all that they have to wait even longer! As if she wasn't already angry enough, this whole train thing had just made it worse.

Before coming to the subway station, she and Lazarus had gotten into a pretty bad argument. Yuuko didn't even remember why they had started arguing in the first place it just..happened. All she knew was that she had pissed him off enough to the point where he walked out to go to the bar to drink till he dropped. Yuuko couldn't handle sitting in his stupid apartment by herself, so she had gone for a walk. It was late now though, and he was probably too drunk to walk home. And even though Yuuko didn't want to, she knew she had to come pick it up. Not like she could now, because the train was late.

"Why is he such an idiot all the time? Why did I even come here? Even in London, everything is still shitty.. fuck.. why can't Amadeus just kill me and get it all over it? Why is he dragging this out? I haven't seen a templar in ages now.. just.. what the hell is going on anymore.." She questioned herself silently and grimaced. With a soft groan, Yuuko leaned against a pillar and gazed off into space. Hopefully, that stupid fucking train would get here soon before she decided to haul her ass across London without one.
_________________

Jurou's travels had wound up leading him to the rainy streets of London. He decided to hop on the Metro to get down to South London, meet up with some old friends while he was in the area, and of course he wanted to find his way into the Infiris Tear and rack up some demon kills.

As he entered the waiting area of the train station, he gazed up and saw that his train had been delayed. "Shit..." He mumbled in Japanese, as not to upset the Americans around him. He decided that seeing as patience was a virtue, he'd pass the time by playing some music.

He pulled the small Ocarina out from it's string necklace which he kept underneath his shirt. He promptly took a seat on the Metro Station floor and begun to play a a happy, upbeat tune. Within a few minutes, the passer-bys took notice of his talent and some stayed a while to stand a listen.
_________________ 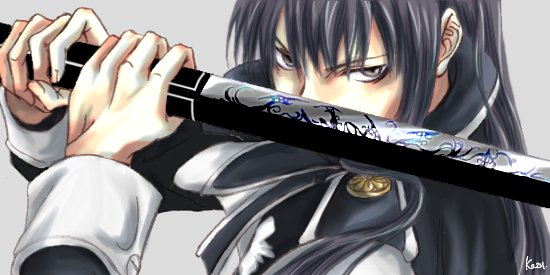 Music floated through the air, and reached her ears. Yuuko had always appreciated a good tune, so she turned around to watch and listen to the player. It was a Japanese man, standing there and just playing an Ocarina. He didn't have a jar or a hat sitting on the ground to collect money, he just seemed to be playing because he could...

Yuuko walked towards the small crowd that was beginning to surround the Japanese man to get a better look. She gently squeezed her way through, and was able to see him up close. The man was actually.. really hot. Yuuko wasn't boy crazy, but she could appreciate a fine looking guy every once in awhile. Even though she was a hard-ass most of the time, she was still a seventeen year old girl. Other women seemed to take notice of this, since they were inching closer and closer. Yuuko didn't pursue though. She only watched his fingers dance over the holes of the tiny instrument. Yuuko wasn't here to flirt. Not like she could anyways, even if she wanted to. All she cared about was the music, really..

When the song came to an end, the crowd began to disperse a bit. A few of the girls had remained though, and began to stroke his ego by complimenting his playing. Yuuko gave a small shrug and turned on her heel, beginning to walk away from the scene. Her sword jostled inside of it's case as she did.
_________________

As the Ocarina Melody drew to an end, Jurou was greeted by a tiny round of applause by the few people who had remained to listen to him play. He couldn't help but smile at the people. His music had always been a hobby of his, but he didn't expect to entertain anyone else with it.

His gaze drifted upwards to the time-board in the Metro. It was almost time for his train to arrive. So he stood up, dismissed the people still around him, and began to walk. It was then he noticed a girl with an odd looking case on her back. It was the kind of case that one would hold a practice sword in for Kendo. As a man well experienced in this Martial Art, Jurou took a small bit of interest.

He walked up next to the girl, his eyes examining her. She was a bit younger than him, though he could see she had all the fine notes of feminine beauty. He shrugged, he had never really been much of a lady's man. He tapped the female on the shoulder and spoke in a cool voice. "Hey there. Nice case you got there, mind if I ask you your name?
_________________

As Yuuko planned to leave, she heard footsteps behind her. She didn't stop walking though, just kept on going. When the footsteps were uncomfortably close, then she got a little unnerved. She slowed down a bit and glanced over at the owner from the corner of her eye. It was the handsome Ocarina player, and he was.. checking her out? What? Don't get her wrong, Yuuko was used to getting some double-takes and some pervs undressing her with their eyes, but this was just a little different. She was actually a little attracted to the person doing it this time. Mutual interest was kind of a nice change for once.

When he complimented on her case and asked her name, this made her eyebrow raise a little. He looked like a ladies man but.. he kind of sucked at conversing in general. Yuuko could already tell. Who the hell starts a conversation with "Nice case you got there"? Only this guy. "And why does my name concern you, sir?" Saya grumbled, picking up her speed once more as she walked. The train was coming soon, she could hear the horn and felt the wind blowing through as it sped around in the underground tunnels.

"If you don't need anything from me, then you should go find someone else to talk to," Yuuko muttered under her breath, a bored expression on her face as she stared at the man. He was hot, but she didn't find any distinct trait other than that that would make him interesting enough to continue talking to.
_________________