To describe him in a nutshell, Marcus Brooklyn is the epitome of badassery and hot-blooded manliness.

His face claim is Kamina of Tengen Toppa Gurren-Lagann. His primary themes will be of camaraderie, fighting spirit, defying the oppressors with vim and vigor, and outstanding leadership and courage in the face of all odds. However, I can go about this two different ways; I've weighed the other options, and of the currently established classes, I feel only two fit the bill.

He could be a Ritualist, whereas his bound Demon will be none other than Alexander the Great, one of the greatest conquerors of human history. Their relationship will be one of bros-for-life; Marcus admires the genius and the sheer manliness that Alexander projects, whereas the latter takes pride in the fact that his Ritualist host looks up to him and treats him as a sort of student or protegé. His fighting style would be more concrete as a Ritualist, and would likely revolve around willpower and lightning control (as there are sources that say Alexander was a son of Zeus).

Or, he could be a Demon Hunter that's been at the job for several years, and is well-established from the get go. He fights with a sword, but most of his Evocations will revolve around courage, willpower, and basically hot-blooded determination. I did think about giving him fire manipulation skills as well, because seriously it's fuckin' Kamina.

I haven't got much down in terms of backstory, specifically because it all depends on what class I choose to make him. I do want a lot of his abilities to capitalize on his manliness and hot-blooded fighting spirit, though I'm definitely open to suggestions. 8D
_________________
English | German | Norwegian | Vulgar Latin | Infernal 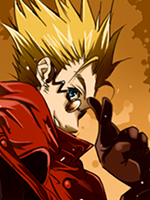