E V E N T # 5
GAUNTLET OF THE ALLSMITH
BRIEFING
Of all the things to exist, in Inferis, what a large monopoly of people truly love is war. Fighting. Combat. And the Archdemon Belial has long since been hailed as the Prince of Warfare; the Allsmith is a patron of combat in all its bloody variants. So for many a year now, he has had his own personal troops in the Undercroft both dispatched to capture specific feral Demons from all across Inferis, and train themselves for this gauntlet. Five champions will be chosen: five warriors, who will be placed into this Gauntlet - non-negotiably - and told to fight for their lives and fight for glory against the many troops of Belial's choosing. Whether they fight alone or fight together is for them and them alone; is it the heroes and villains who stand on their own against the masses who get the most glory, or those who form a team? That much is up to you...

The way this Event will work will be that it is comprised into four rounds. After a time limit of one week expires (during which time you may post in a free-for-all as many times as you'd like without double posting), an announcer (the Something Has Happened account) will signify the move on and which type of fresh Demons have emerged from the great coliseum at the Undercroft. The four rounds will contain the following Demons and in the following quantities:

RULES
- First come first serve.
- No real post order, save for the fact that Belial will begin and end the event.
- The tournament will consist of four rounds, each of which will last for one week. Failure to post during that week will result in your being excluded from rounds from then on, or, in the case of the fourth round, receiving the prize.
- Belial's champion will be chosen (OOC) based on the quality of their posts through the event, and decided by myself, Niko, and Alastor. Note; you will not win by killing everything first. You will be rewarded on your capacity to write well, tactfully, and respectfully. Written strategy and tactics as well as style are being judged here; of course you're welcome to join even if you don't think that's your forté and would simply like to play, that's fine - but if you're selfish and steal all the enemies from others, we will take measures to ensure this doesn't persist.
- Finally: we understand as they are the time constraints are strict: so we recommend you make each post long, and either kill first time after one long struggle or don't kill at all: anything that remains alive after round transitions will be figured to either have died of its own accord or returned into the Undercroft. Don't worry; leaving enemies alive will not be met with lower judgment. However; Barbarossa the Bloodied must be defeated. He doesn't have to die (if he doesn't but is defeated, Belial will presumably execute him) but must be at least brought to submission and inferiority.
- This mission will aim to begin on the 26th of August.

REWARDS
- 5 points for every round completed, an additional 5 if you stick through all four under time constraints; so 25 total.
- And, additionally, Belial's new declared "champion" will receive a new weapon of their choice. This will be imbued and tailored to their requirements and the Prince of Warfare will conjure and create it for them; for instance, a Templar could receive a gun, a Demon Hunter themed around swords a blade... but it will be imbued with specific properties, perhaps elemental, perhaps otherwise. THIS WEAPON WILL COUNT ADDITIONAL TO YOUR APPARATUS, EVOCATIONS, AUGMENTS, OR INFERIS MORPHS IF YOU "WIN", BUT HAS TO BE POSTED IN THOSE INFERIS-SPECIFIC TOPICS. 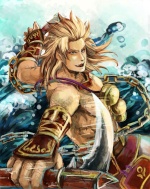